The European Independent Film Festival will be held in Paris 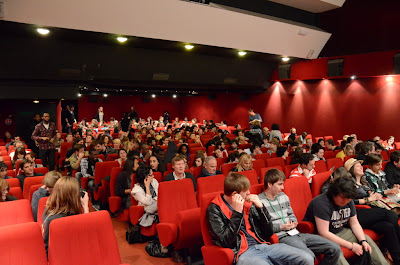 ÉCU – The European Independent Film Festival is dedicated to the discovery and advancement of the very best independent filmmakers from around the world.
We proudly provide a unique platform for risk-taking storytellers to reach the broadest audiences possible. It is through this platform that we achieve our goal in fostering the collaboration and exchanging of ideas to further the careers and artistic paths of our ‘Offical Selection’ directors. ÉCU – The European Independent Film Festival is deeply honored to be such a integral part of this creative process.
Our annual festival showcases films that demonstrate quality, innovation, and creativity in both form and content. These qualities are judged in 15 categories, 7 of which are open to non-European filmmakers (from the Americas, Australia, Africa, and Asia), and compete for 25 awards. Jury members come from around the globe, have a variety of backgrounds, and are all united in their desire to screen films that will truly impress and inspire attendees.
ÉCU has expressly established itself and is often referred to as the Sundance of Europe. As such, we are the perfect venue for bold and visionary filmmakers to present their work to the cinema-loving public who are actively seeking alternatives to commercial-hungry major studio projects.
Our screenings of new and thought-provoking cinematic creativity attracts more than just the public, but agents, talent scouts, production company representatives, distributors, and established producers, all of whom are searching for inspiring projects and raw talent.
ÉCU has increasingly gained attention since its inception eight years ago with much interest and appreciation by the European press. This kind of public attention engages the general public and industry representatives thus making it easier for independent filmmakers to receive the recognition they deserve.
ÉCU – The European Independent Film Festival has a wide variety of events for attendees to participate in throughout the weekend. Following every screening session, there are Q&A’s where audience members can pose questions directly to the directors. Directors then have the opportunity to respond and speak about their work and process. An assortment of workshops focusing on a number of subjects and hosted by industry professionals are available to all attendees. ÉCU is also a strong supporter of musicians and live music can be heard throughout the entirety of the weekend. Every evening there are amazing after parties were attendees and filmmakers can unwind, ideas can percolate, and a general good time can be had by all.
The next and 8th edition of ÉCU – The European Independent Film Festival will be held in Paris, France March 29th – 31st 2013.
Posted by Ithaca Night Life, NY at 5:41 AM No comments:

The Champs Elysees is the single most political historic street and district in Europe. Here an entire International focus takes place when either France or another nation sets the fact - celebration of their recent victory - sending their Army to parade - demonstration of their success, and national pride. The Victory Way of all Europe. Nonetheless, in the every day events and daily lives of the France, here takes place fashion models show - off their recent finds, artists sets up their painting boards and etching their artistic discovery on the consciousness of Paris's society of The Arts, and restaurants making sure their efforts will gain the attention of the world by best menus the city can produce among magnificent trees, gardens, and monuments giving a romantic seeing to ever day life
Posted by Ithaca Night Life, NY at 7:02 PM 1 comment: